I’m a sucker for hotels that make me wish for time travel, or at least a grand, or at least 60’s pool parties to attend and intrepid adventurers from a previous generation. Monkey Tree Hotel does that, and it does it well.

Designed in 1960 by famed architect Albert Frey, the hotel was a Palm Springs destination for celebrities in the ’60s, ’70s, and early ’80s. Its glory faded over the next decades until, in 2014, it was bough up by a financier-architect duo, who restored the property to its original splendor with bright colors (lots of of yellow) and mid-century furnishings that nod to the 60’s.

It’s definitely not in-your-face design, and I can see how for some it might seem more like a glamed-up motel than a *boutique* hotel (they’re wrong). But perhaps its strength lies exactly in the fact that it’s not trying to speak to everyone, or appeal to the masses. This is were quietly cool folks come to find top notch hospitality, understated elegance and a quiet pool where they can soak up the sun and relax in peace.

Upon arrival on a Thursday afternoon, the first thing I noticed was how serene the premises were. The landscaping was simple but tended with love, the music was soft and the only other guest I could see, was lying under an umbrella enjoying a book. Even when more guests showed up, the premises remained remarkably quiet, which I think says a lot about the type of clientele they attract. 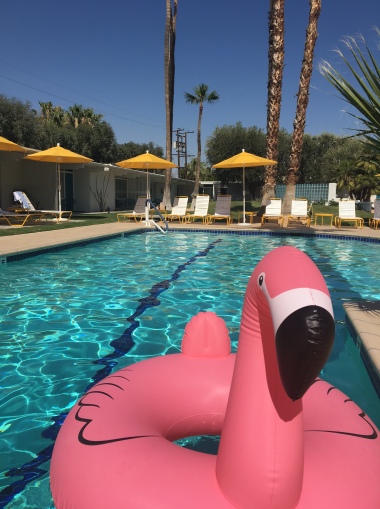 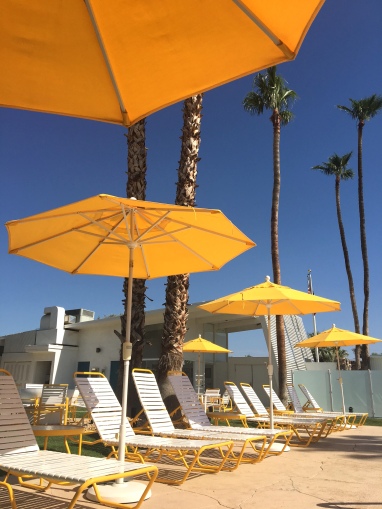 The owners are also trying to go that extra mile by offering complementary breakfast and a sangria happy-hour every evening. I didn’t get a chance to enjoy the sangria because I got distracted by work, but I thought the breakfast was wonderful, with homemade gluten-free pastries, non-dairy yogurt options, eggs and, even, cold brew coffee! I didn’t try the pastries because of keto, but I appreciated the fact that they were there. 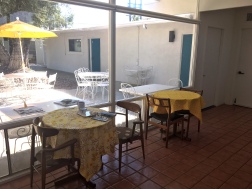 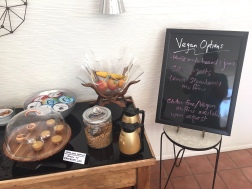 Another thing that stood out was the small Scandinavian spa they have on the grounds, which comes with a dry sauna, a hot tub and an cold tub. Temperatures were around 120F between 12 and 3PM, so I couldn’t stomach any more heat, but I did take advantage of the cold tub several times to cool off from lying in the sun. Since I have bulky varicose veins and an autoimmune condition that flares up in extreme heat, I really appreciated that tub! 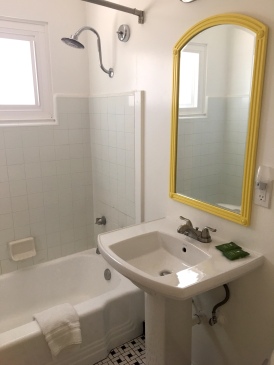 My room was spacious and clean, although perhaps a little more modest in terms of design than I had expected. I loved the huge mirrored windows, and the fact that you could see the entire premises from the couch and kitchen. In terms of amenities, they have all the standard stuff: free wifi, hair dryer, robes, toiletries and they also provide you with a small basket with complimentary water and snacks. The basket is a wonderful idea, but the snacks were standard processed junk, which was a little disappointing.

An area that could definitely use improvement, are the in-room kitchenettes. I booked a room with a kitchen specifically because I wanted to cook all my meals at the hotel, but it proved quite a challenge. I mean I get it, it’s not my kitchen, but I struggled with things that shouldn’t have been an issue considering the price tag.

The first thing that struck me was that there was only a tiny teeny fridge, which I guess is fine if all you wanna store are some berries and kombucha, but if you wanna do some semi-serious cooking over a number of days there’s just not enough space.

Also, there were no proper kitchen knives in my kitchenette, only two “steak knives” that wouldn’t even cut through a bell pepper. The burners were unstable, and the flimsy, lightweight teflon pans they have didn’t make things any easier. I could tell the owners were well-meaning because they had, like, five different pans, but I just wish they had one that worked!

Anyhow, the kitchen just felt a little “neglected” overall, compared to the thought that has clearly been put into other aspects of the property. I also think the bathrooms could use toilet brushes – they’re not pretty but super handy if you’re sharing the room with someone else.

These things didn’t stain my experience though, and I did have a fantastic time during my stay! I will be back for sure once the temperatures cool down, and take advantage of their Swedish spa and the fabulous trails just outside town.

View all posts by gritandhealing

Welcome to Grit and Healing!

A place where I share grain-free, low-carb recipes along with my international travel adventures and insights from my autoimmune journey.

Thanks for stopping by!

Have a question? A comment? Want to get in touch?

Send an email to gritandhealing[at]gmail[dot]com

* THIS SITE DOES NOT PROVIDE MEDICAL ADVICE *

The information on this site is provided for general information purposes and may not be relied on as a substitute for professional medical advice, care, or treatment. By using this site you agree that you have read, acknowledge, and agree to this disclaimer. Always seek the advice of a physician or other qualified medical provider for your medical condition(s).